Fitbit’s name has been synonymous with fitness trackers since its inception. But for the past few years, the company has also been branching into the smartwatch world to compete with the likes of the Apple Watch and Samsung’s wearable lineups. Fitbit even purchased the remains of Pebble to help facilitate this.

Last year’s Versa was the company’s best effort in making a competent smartwatch. It was comfortable to wear, had great battery life, and included all of Fitbit’s advanced fitness and sleep-tracking features. But at the same time, it fell far short of other smartwatches on the market, with poor notification support and lack of productivity features.

The new $199.99 Versa 2, which hits stores on September 15th, is the company’s latest smartwatch effort. As you can tell from the name, it’s an evolution of the Versa, with a few design tweaks, a handful of new features, and the same price. It is a better Versa and an excellent fitness tracker. But overall, it’s not a better smartwatch.

The original Versa was one of the most comfortable smartwatches you could wear and the Versa 2 is just as pleasant on the wrist. It’s not too large, not too small, and should be fine on a wide variety of wrist sizes. It’s also very lightweight and the tapered design hides the bulk of the watch well. The Versa 2 is one of the few wearables that I’ve been able to comfortably wear 24/7, even while sleeping.

The general design of the Versa 2 is the same as before, but Fitbit has simplified the interactions down from the previous multibutton setup to a single button on the left and the touchscreen. The watch doesn’t lose any functionality, however — you can still do all of the same things with the Versa 2 as could be done with the first Versa.

I do wish Fitbit had made it easier to change straps on this model — the Versa straps have quick-release pins, but the mount is so recessed into the watch’s body that getting the pins to click into place is very difficult, especially with the rubber strap that’s included in the box. My review kit included a very comfortable perforated leather strap that was much easier to install, but that will cost you $50 extra. 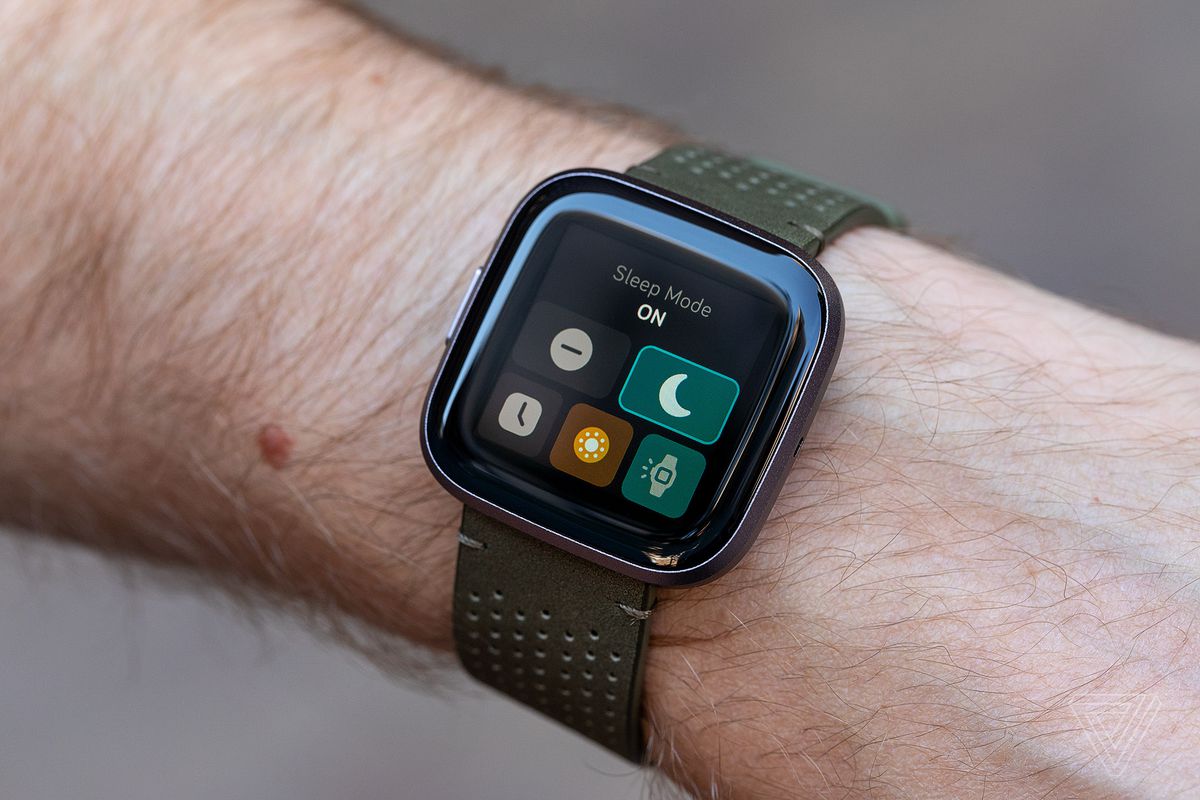 Fitbit has traded the Versa’s LCD panel for an OLED screen and this is the best upgrade that the Versa 2 brings. It’s bright, colorful, and easy to see both indoors and out. I was able to view the screen with no problem in direct sunlight and through polarized sunglasses. The OLED panel also enables the new always-on display feature, which lets you always see the time or your workout progress. But the always-on feature has very limited customizability (you can choose between digital or analog clocks and that’s it) and it disables the raise-to-wake feature, so you have to double-tap the screen or press the side button to wake the watch.

Unfortunately, the display is still surrounded by a thick, chunky bezel, which has the effect of making it look even smaller than the postage-stamp size that it is. On the plus side, the Versa 2 ditches the tacky “Fitbit” branding that was below the screen on the first-gen model.

Fitbit has also added a microphone to the Versa 2, giving it some limited voice control abilities. There’s no speaker, so you can’t use it as a speakerphone, but if you have it paired to an Android device, you can speak replies to messages and it will turn those into text. (Sorry iPhone users, you still can’t reply to messages at all with the Versa 2.) This worked well in my tests, with quick and accurate transcriptions of my voice. It does take two or three taps on the screen to record a voice reply, which is a bit tedious, and you can’t actually initiate a new message by voice — you can only reply to incoming ones, so there is room for improvement here. 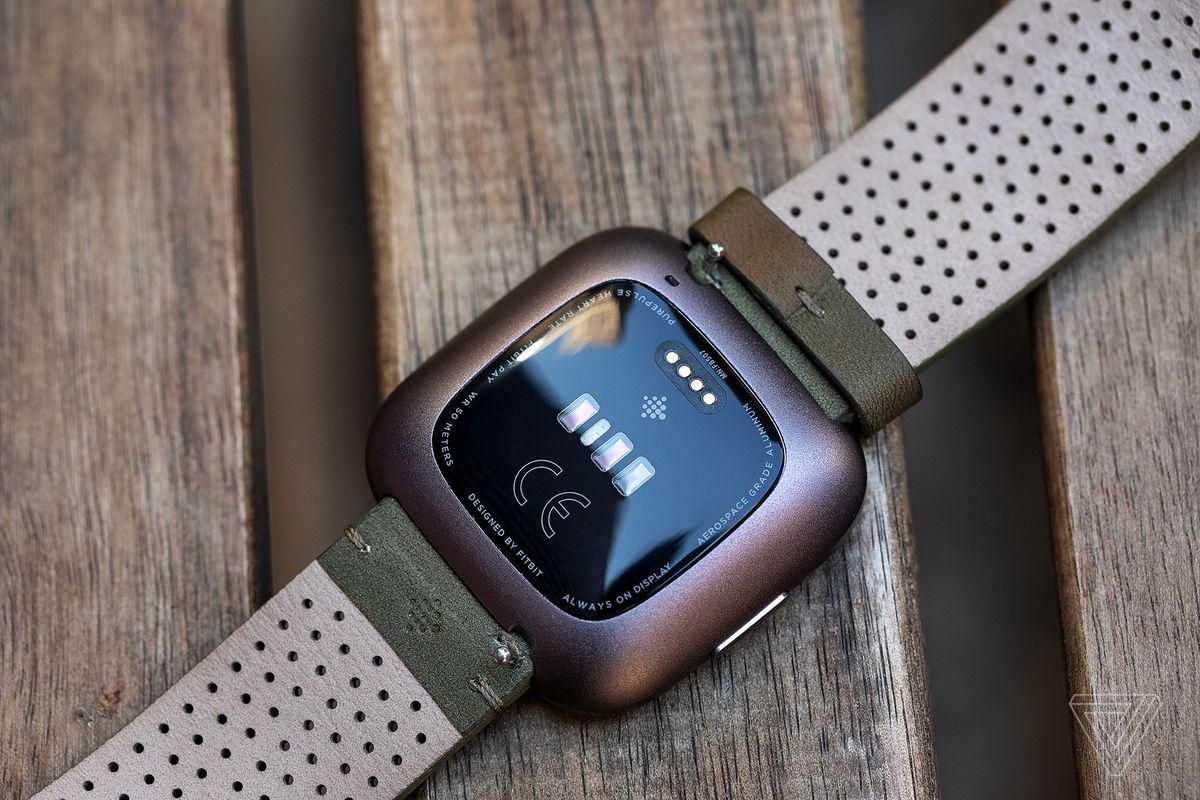 The microphone also comes into play with the new Alexa features. Long-press the side button and Alexa will open, from which you can ask it questions or tell it to do Alexa-related tasks like control smart home gadgets, set timers, or show you the weather. Since the Versa 2 doesn’t have a speaker, all of Alexa’s replies are displayed on the screen and it can’t do things like play music or any other audio-related task. Alexa also can’t actually control the watch — everything you ask Alexa to do is contained within Alexa’s interface, including timers, alarms, and other features. You can’t ask Alexa to send a text message or place a call from your phone, like you might do with Siri on an Apple Watch. You can’t even start a workout with Alexa. Nor can you activate Alexa with a voice command — the only way to launch Alexa is to long-press the side button or tap the icon in the quick settings panel, which turns using Alexa into a slow, two-handed process.

THE ALEXA FEATURE IS FRUSTRATINGLY LIMITED AND CLUMSY TO ACCESS

The watch carries over all of the fitness features from the first Versa, including intelligent workout detection, always-on heart rate monitoring, and sleep-tracking features. New this year is a Sleep Score, which tries to condense your sleep-tracking data into an “X out of 100” score, rating how well you slept. In my time testing the Versa 2, I averaged a Sleep Score of 76, which the app ranks as “fair.” Fitbit says this feature will come to all of its devices that have heart rate monitors.

There’s also a new Sleep Mode for the watch that disables the display from lighting up or notifications from buzzing while you’re sleeping, which seems like something that should have probably been available on last year’s model, but I’m glad it’s here now. You can initiate the Sleep Mode from the quick settings screen on the watch or through the smartphone app, where you can also set it to turn on and off automatically based on a schedule. Finally, Fitbit says it is working on a Smart Wake alarm feature that will attempt to wake you up at the optimal point in your sleep cycle, but it won’t be arriving until later this year and I was unable to test it. 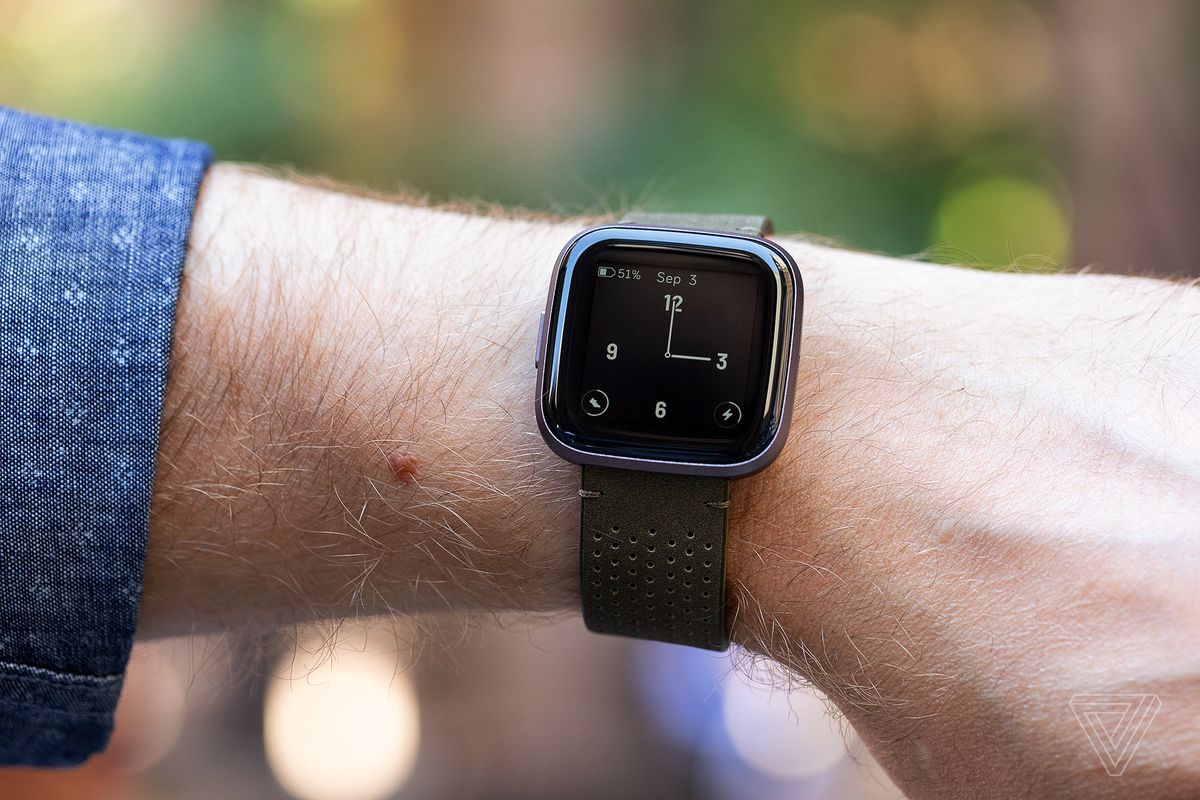 Finally, while it’s nice that Fitbit’s mobile payment system, Fitbit Pay, is available on all versions of the Versa 2, I was unable to test it because it doesn’t support my local credit union and has a far smaller number of supported banks and financial institutions than Apple Pay, Google Pay, or Samsung Pay (all of which support my credit union).

Fitbit tells me it refrained from adding too many smartwatch features because its customers don’t want to be burdened with too many things they won’t necessarily use. But if that’s the case, they should probably just buy a Charge 3 instead of a Versa 2, which has the same set of fitness tracking features, costs less, and is smaller to boot. If the company is going to be serious about competing on a smartwatch level, then it needs to do better at smartwatch functions.

The Versa 2 is indeed a better product than the Versa, and the design changes and new features are mostly welcome. But it’s not any more compelling of a device than before: it’s an excellent fitness tracker, but if you’re looking for a smartwatch, you can be better served by an Apple Watch or one of Samsung’s offerings for Android devices.